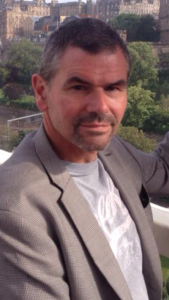 Andrew was born in Ilford, Essex, in 1958 and attended Mayfield boys’ school. After completing an apprenticeship in the motor trade he started his own business, and later became involved in property management.

Although his passion for writing had to take a back seat to a successful business career for many years, he wrote creatively at every opportunity and finally published his first novel, The Medusa Conspiracy, in 2012. The sequel, The Medusa Files, follows in Spring 2016.

He has two children, and still lives and works in Essex.

I was married at 23 and I found myself with a young family, with that and a fledgling business there never seemed enough time for anything outside work and children.  But life moves inexorably at an incredible pace and as many of us will attest, you see your children suddenly grown up and wondering where all that time went.

Being in a position now I find myself able to follow my passion of writing. The subject matter I chose purely by chance, but once I began to form some ideas I realised it was what I wanted to pursue. I was fascinated by such bizarre and often implausible reports from a strange country, but the more I researched the lives and the political philosophy of North Korea the more I became drawn in. Fictionalising accounts of real events and threading them into a plausible and entertaining story is a challenge but one I found both absorbing, sometimes frustrating, and strangely affected me on a deep emotional level.

The Medusa Conspiracy was my first book and examined the lives of two people bought together by a series of strange events, who lived in diametrically opposed societies on opposite sides of the world; they eventually become lovers and were looking forward to a new life together. As the threads of their separate pasts are linked together Ti-woo, the main protagonist, found she could not quite escape her past life.

In The Medusa Files, my sequel novel, Ti-woo is found weak and vulnerable and in a place she does not wish to be, but for the sake of her child has no choice. Introducing new characters was one of the main drivers of the sequel and these same women find themselves questioning the fundamental values of the North Korean State. They come to realise they are in conflict with their loyalty to a society and doctrine they were bought up to revere and their own sense of humanity. I would like the reader to try and put themselves in their position and what you may do given the same circumstances.

Both books are based on factual stories and I genuinely hope, may have some small influence in changing people’s perception and raising awareness of a difficult issue on the world stage.

I travel widely and enjoy the experience of seeing new places, customs and the rich and diverse communities around the world. My next book may well be set in India as I have many friends there and have been moved by the appalling poverty, and whilst we all comment on why and how society’s act in the way they do and often question the motives and actions of other communities, we must all imagine how we would act and live given similar difficult circumstances.